Through its period of activities, PI Lithuanian Agricultural Advisory Service (hereinafter referred to as LAAS) has been involved in national, international and innovation projects.

The aims and objectives of the implemented projects are related to the objectives of agricultural policy and the needs of farmers. The activity aims at close co-operation with municipal, research, training institutions, foreign partners and professional organisations of advisers.

After the results of the ReCAP project (ReCAP – Reinforcing CAP) which was finished last year had been analyzed, it was decided to try to motivate regional advisers and farmers to use satellite data for monitoring of crops. Advisers and farmers became interested in testing of the IT product

LAAS in co-operation with partners from Greece, Spain, UK, Serbia, and Belgium  implemented the ReCAP project (duration of the project – 2016–2018) funding for which had been received from the Horizon 2020 programme. A tool of remote crop monitoring (a commercial platform) has been developed as a result of the project activities. The remote sensing component and information provided by a user are integrated into a value-added service – remote inspection of a farm which could be carried out by the National Paying Agency (https://www.recap-h2020.eu/).

LAAS in collaboration with the National Paying Agency and other project partners took part in the process of development of the tool as well as in testing its functionalities. Sixty specialists of LAAS and a hundred and fifty farms all over the country were involved in testing activities. The specialists of LAAS had an opportunity to try out the new IT tool and farmers could upload their parcels into the platform and use different vegetation indices. Actually, eighty-five per cent of the specialists of LAAS who took part in testing activities of the tool stated that they would like to use this tool (or a similar one) in the future. The average age of the respondents was 42 years, all of them (100 per cent) had high education and 42 per cent of the respondents claimed they used IT tools for search of information every day. 92 per cent of advisors and specialists who had tested the tool expressed their willingness to be informed about the development of similar tools in Lithuania.

Having taken into consideration the results of the survey, it was decided to provide a link of an open access with spatial data about crops available during the period of spring-summer-autumn of 2019. Therefore, an enquiry about the possibility to provide a service of remote crop monitoring was sent both to national and international partners. A German startup Geocledian GmbH was chosen as a service provider as the company offered the lowest price as well as the possibility to provide data in Lithuanian. Shape files of parcels to be monitored were sent to the German company and a new service purpose became available for advisers and farmers in the system of integrated plant protection information, consulting and training called IKMIS (https://www.ikmis.lt/User/LogIn). The service is called spatial data of crop monitoring. 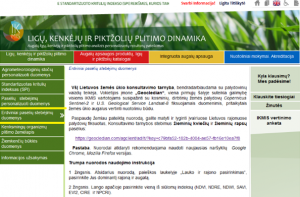 One can find a link in the system IKMIS, providing satellite images of parcels with winter wheat and winter rapeseed located in different regions of Lithuania (https://geocledian.com/agclient/ad/lt/?key=c79bfa52-182b-4004-ae57-fb16e10ea7f8). The parcels are owned by farmers who agreed to share information about their parcels in this system. There are also parcels belonging to farmers who are taking part in projects implemented by LAAS. The data are provided by satellites Copernicus Sentinel-2 and Landsat-8. A user can download and save images in PNG format and use them in other programmes, if needed. 196 parcels with the total number of 1967 ha are available via the link provided by Geocledian GmbH.

Number of initiatives and data of open access is increasing

After the new service had appeared in the IKMIS system, farmers and advisers had a possibility to monitor more parcels few months later. Ltd Geomatrix is a Lithuanian company well-known as a provider of services such as provision and processing of satellite data. The company offered users an opportunity to receive satellite data provided by Copernicus Sentinel (data recorded in June). The data are available via a link of an open access which can be opened using an app or a computer.

A new app of an open access appeared a month ago. The app NMA agro (NMA – National Paying Agency) is used for monitoring of crops all over the country. 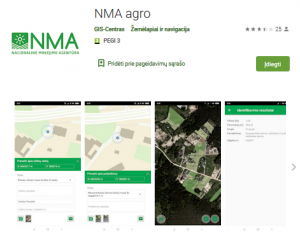 Availability and regular provision of such data seemed as being unlikely few years ago both for advisers and farmers. Nevertheless, it is a usual activity nowadays. It should be noted that the possibility to regularly receive satellite data for crop monitoring does not ensure rational use of these data. Practical experience is needed in order to be able to use these data to their full potential. As new opportunities to receive satellite data occur, LAAS faces new challenges such as the  preparion of specialists and advisers being able to interpret and use satellite data.

. The centre connects research, education, business and governmental institutions as well as agricultural advisers. The activities of the centre are focused on the use of satellite data to develop new products and services.